My writing mate Lydia and I are back meeting, seeing someone, than writing for ten minutes using that person as an "object," "trigger" or "victim." Today an early morning rain stopped and we went to L'Hostalet and drank tea while we wrote. 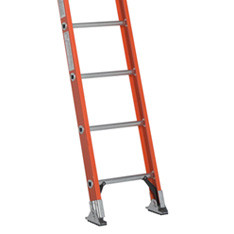 Today's  "trigger was walking across La Place de Republique carrying a ladder. Here is my draft.

"Damn ladder," he muttered as he walked across La Place de Republique carrying a ladder.

He stepped in a puddle. "I should have put on shoes instead of these stupid sandals." "Stupid weather. Rainy one minute, sunny the next."

He changed hands and when he grabbed the wooden step, he felt a prick. He put the ladder against a green light pole. A splinter, too small to be removed by his fingers mocked him. He would have to wait until he delivered the damned ladder to his bitchy sister-in-law before he could go home and get the tweezers. He wasn't going to ask that bitch for anything.

Why couldn't she buy her own stupid ladder

Two little girls ran by him laughing. Noisy brats. Where were their parents letting them run wild.

Laughter came from the café across the Place. They never should let it open, he thought. Disturbs us all.

His sister-in-law's house was painted sandy pink with baby blue shutters. She had flowers on the balconies of the second and third floors and big pots of flowers on each side of her door, which Maria opened.

When she hugged him, he shuddered. Cheek kisses were bad enough.

"Give my love to my sister," she said aloud and under her breath added, "being married to you, she needs it." 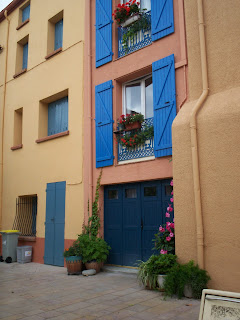 “And the cardboard toy theatre and the case of curiosities had been removed as has the ivory table.”  The Great complication  by Allen Kurkweil was the trigger for this piece of flash fiction done in a ten minute free write along with another writer.

And the cardboard toy theatre and the case of curiosities had been removed as has the ivory table.
Megan bombed thru the library to the kitchen.  It wasn’t until she dropped her car keys in the hold-all drawer that she realised something was different.

“Son of bitch!” Had Thomas still been living there he would have told her to lower her voice.
That he was the guilty party for the missing items was without alternative. He loved those items as she had when they first acquired them. Funny how the same thing could trigger such diverse memories.

They’d bought the theatre at a flea market on a grey November day arguing the seller down to $5 from ten. When they came home they drank hot tea in bed before making love. Only on the next Monday had she learned he was sleeping with Clare.

The curiosity case had been put out on the sidewalk in front of a brownstone apartment building and was under a lilac tree in full bloom. It was down the street from her best frenemy Angela who was another in his string of lovers.

The ivory table was bought in New Delhi, a second honeymoon or a last attempt to save the marriage. They had held hands as they wandered the bizarre and never  tired of the curries and other food. It might have worked had Thomas not kept going out to call Rene.

She should have changed the locks.

As she moved a red leather chair into the hole left by the case she vowed that whatever she found to replace the missing items would carry only good memories.

Today, sitting behind L'Hostalet sipping tea and munching Catherine's savory tarts, we watched the vendors and customers at the marché. They gave us much inspiration for my writing friend and I to do our ten minute exercises creating a flash fiction piece. The only drawback was we know too many people to chat with. And people come first. But I did get one piece written. Here it is unedited. 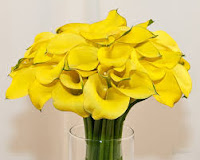 GINA spent at least 10 minutes trying to decide to buy flowers. She left the marché stand, selected cheese and tomatoes from Jean and Pierre's stalls.

The desire for flowers was too strong. She went back. Lilies were four euros, a mixed bouquet five, and a single rose three.

He put the flowers in a transparent film, took yellow and orange ribbons and made a bow near the bottom of the stems. He used a small knife to run down the ends, creating curly cues.

Gina's other errands were mundane, although the smell of fresh bread from the oven made the bakery smell heavenly. The butcher was able to sell her a cheap piece of mutton, that she knew she could stew into tenderness

Back home she put the flowers in a vase on the kitchen table, but then moved them to the living room.

As she prepared the stew, she changed her mind and returned the flowers to the kitchen table. She found herself smiling every time she saw them as she moved from table to counter to stove in preparing the lambb stew.

The kitchen door opened. Thomas stormed in. "What are those?"

"How much did you pay for them?"

"God damn waste of money." He went into the living room slamming the doors behind him.

She looked at the flowers and a wave of sadness swept over her not at the waste of money on flowers but the waste that was her marriage.

As my writing pal and I sat in the café, we didn't see anyone (as we call them victim, target or body) walking on the street. We went to Plan B to find the trigger for the next exercise: read a random sentence from a book. It was "All of this was elementary and the most interesting question...?" We were to fill in the blank and write for 10 minutes.

All of this was elementary and the most interesting question was why.

Frank asked why he had gone to his his car just then. He could have waited for the hot coffee in his thermos instead of abandoning his intersection three minutes early.

Alexandria asked why any mother would let an eight-year old go to school by himself. She'd called the child protection agency, but didn't know the outcome.

Darren asked why his friend wasn't in class.

The mayor asked why he hadn't listened about the sign.

Jason asked why he hadn't slowed at the intersection.

My writing pal and I were at La Noisette. A funeral was taking place at the church across the street, when we saw a young woman, dressed as described in the story. We used her as a trigger for the 10 minutes of free write. This is my flash fiction piece. 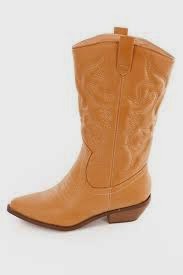 MOST of the mourners wore dark clothes. As was the local custom, they weren't dressed-up. Sunday-best for these occasions had long ago gone the way of the dodo.

They all turned to stare when Isabelle bounded up the church steps in a white short skirt, beige cowboy boots and a beige suede fringe jacket that would have been more appropriate on the Texas panhandle.

Isabelle knew that would be the reaction of Jacques' friends and neighbors.

They had never approved of her, thinking she was after his money. His wife had not been dead a month when she started visiting almost daily.

He had not been that well before his wife of 50 years had died, but it was as if he had staved off his own illness to take care of her.

The French don't have a good word for "floozie" but if they did, they would have applied it to Isabelle.

"Disgusting," one woman murmured as Isabelle entered the church.

Isabelle heard, but smiled. It was not that she was happy that Jacques was gone except for the fact he was now pain free.

She had deliberately selected her cowgirl outfit to honor their love--not of each other but of the American West.

In his last week he'd told her about the Navajo, Genizaro, Apache and Comanche tribes including their customs. He was an expert on cattle raising although he'd grown up in Paris and had never been near a real ranch. The western flora and fauna were more familiar to him than the plants outside his front door.

When he talked, he forgot his pain.

Isabelle knew, even if the others didn't, he would laugh at her costume, and that was worth their censure.

This exercise was triggered by the line from a book. "But the water bowls never worked."

But the water bowls never worked.

And the wood stove? Maybe in olden times women could cook and cook well over a fire. Her? She could undercook or overcook anything.

And what kind of holiday was it anyway when she had to go into the woods to pee or worse and cooking was an almost all day process?

Her husband loved this cabin where he'd spend every summer during his childhood. This was their first trip after two years of marriage. He'd been so excited to show off its wonders.

They had to reach it by God damned canoe, for Christ's sake, their supplies at their feet as they paddled across the icy lake.

Now that was another thing--her choice of feeling dirty or turning blue in the lake.

Sexual fantasies for her holiday? Her fantasy, now, was a hotel with a heated pool, restaurants with stars on their door, churches and museums to explore and maybe a concert.

Her husband's head and shoulders appeared in the kitchen window. "Wonderful news!"

Email ThisBlogThis!Share to TwitterShare to FacebookShare to Pinterest
Labels: wood cabins
This was triggered at La Noisette with a woman sitting among several empty coffee cups looking at her mobile phone. Another woman joined her. 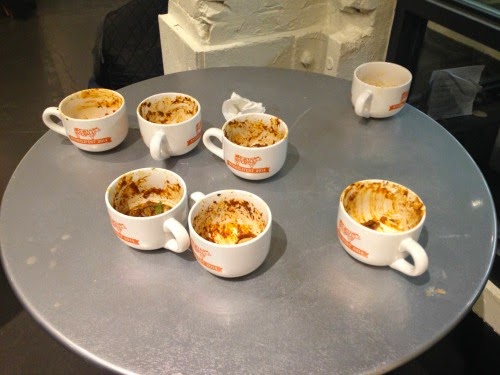 Helen checked her mobile. Nothing! While her friends were still there, drinking coffee and complaining about their husbands, she hadn't thought about it at all, a welcome break.

The waiter had not cleared the empty cups.

Aurelie returned from the toilet. Of the three women she met every morning, Aurelie was Helen's favorite.

About two years ago, Helen had developed the habit of going to the tea room every morning for a coffee and sometimes a croissant.

Marie was usually there, reading The Independent. One morning Helen asked if she'd finished with the paper. They'd talked about the photo of the mayor and how often he managed to get his picture into the paper.

The same with Suzanne, another regular. Soon they never bothered to sit at different tables.

Aurelie was the last to join the group. She was a newcomer to the village. When she was there, they laughed more.

Helen looked at the phone. Still no message from her father at the hospital an ocean away.

Aurelie put her hand on Helen's. "Your mother is in a good hospital with good doctors. What will be, will be."
Posted by DL NELSON at 3:33 AM No comments: